I was exited to get into trekking mood once again after a gap of 1 week.   Did not want to miss this trek as i could not make it to Banantimari Betta the previous week.      Was all geared to meet the fresh team for the trek.       Planned the route for the trek and started @ 6 AM  to reach sumanahalli junction on Magadi Road  with Sribacha and my better half.   We were the first to reach the place, followed by Rufus , Vivek , Anthony and Tripuraj Singh, a passionate biker.    Finally we had 3 cars and a bike for the trek.        Left Magadi Road by 7.30 AM after picking up all the 15 trekkers and cruised towards Magadi our first stop for breakfast.

It was a fantastic long drive in the morning and reached Magadi 52 Kms from my residence.   We packed breakfast from Basavaraj Hotel and proceeded towards savanadurga , 13 Kms from Magadi.   It was beautiful driving across the forest  area and reached Kempegowda Nature park at Savanadurga where we parked our vehicles for the day and proceed to have the breakfast.      Anthony ensured that we have team introduction before we embark on trek and as customary informed the team about the do's and dont's during the trek and the no littering concept of the group.   Unique piece of his information was briefing about the history and significance of this place.    Savanadurga as you can see from different blogs on the net, was a fort of Tippusultan who eventually lost to Lord Cornwallis.    Most of the Tippusultan's forts has been on monolithic rocks and had built robust fortress across the hillocks. This was also the homeland of Kempegowda who was the chieftain of the  Vijayanagar empire representing Bangalore.

Coming back from the history, we were very very hungry and wanted to hog  some food before we speak up next.     We had a team pic at the park before we proceeded for the trek. 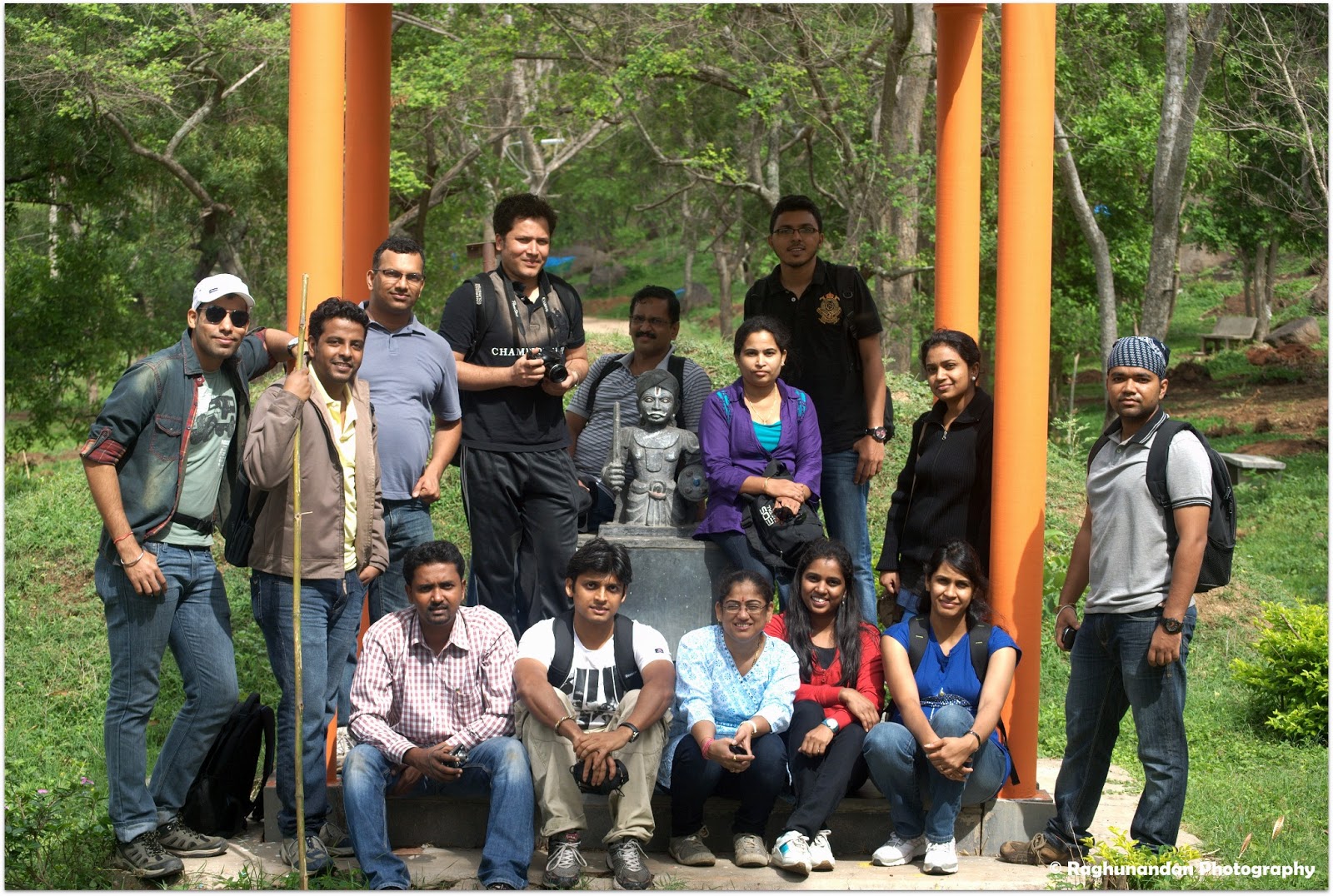 We could see smiling faces after the breakfast and proceeded towards the trekking path, adjacent to the Lakshmi Narasimha Temple.     A lot has changed ever since i had my 1st trek 21 years ago to Savanadurga.     All 15 of us were very enthusiastic and started trekking the 1st leg of the trek.     We had 4 of them who were first time trekkers and few 1st time trekkers with BTC.    Started the trek with blame game and my better half commented that she cant make it up as this was very very steep had she knew this before she would not have come.    Had to cajole and motivated her to climb the 1st leg.   Same
with Sanisha who had come with regular slippers.    Both felt comfortable after completing the 1st leg, which is a rocky terrain.  After scaling the rocky terrain, most of us got the confidence that we can make it to the peak.  However none of us knew how long it would take to trek to the peak.   I was busy clicking pictures of nature, candid moments of fellow trekkers. It was awesome to see greenary 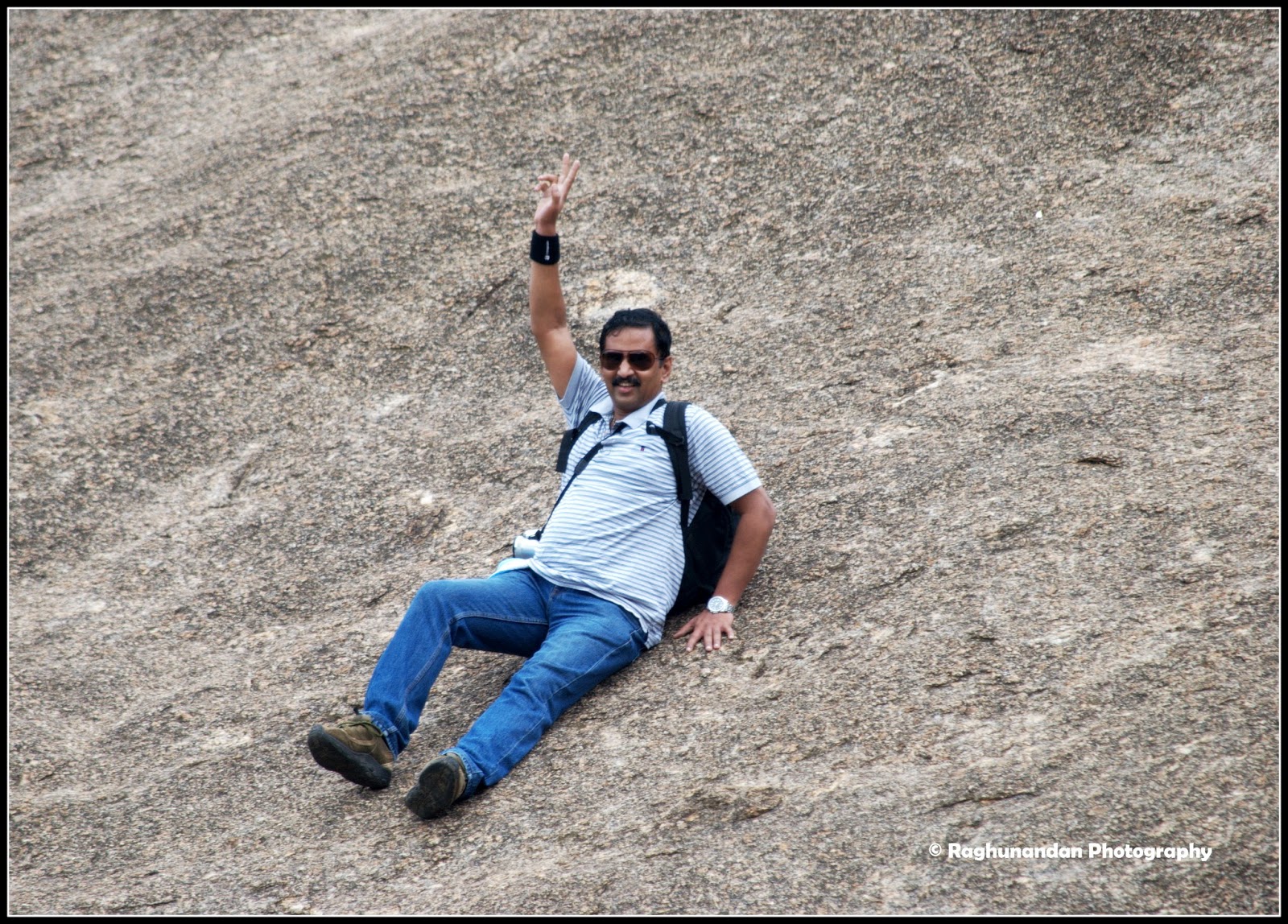 every where and calm and serene environment, free from mobile calls from where we could focus more on our trek path.    Almost ended last of the team to ensure that we all get going and no one is left out.  We took rest at regular intervals so that every one can scale the peak without much difficulty.   Rufus was our motivator who ensured we took break along with him during the trek.    He gave me more time to capture the moments.  After regular breaks, we encountered our 1st steep rock which was almost 75* and to my amusement, saw Rufus and team scaling without any hurdle.     None of us had any slippages during this phase.   Enjoyed the nature beauty and the lush green trees due to the onset of monsoon.   we were lucky it did not rain during our trek and it was an eventful activity.  Once the team reached the 1st comfort zone, we relaxed a bit and started shooting pictures of the team.     We had our second group picture of the team at this spot.     This is the actual spot from where the fort gets extended, but at present we can only witness the path next to the wall which leads to the top of the peak.  Guess this path was constructed for movement of cartilages and horses from the barracks to the top of the hill. 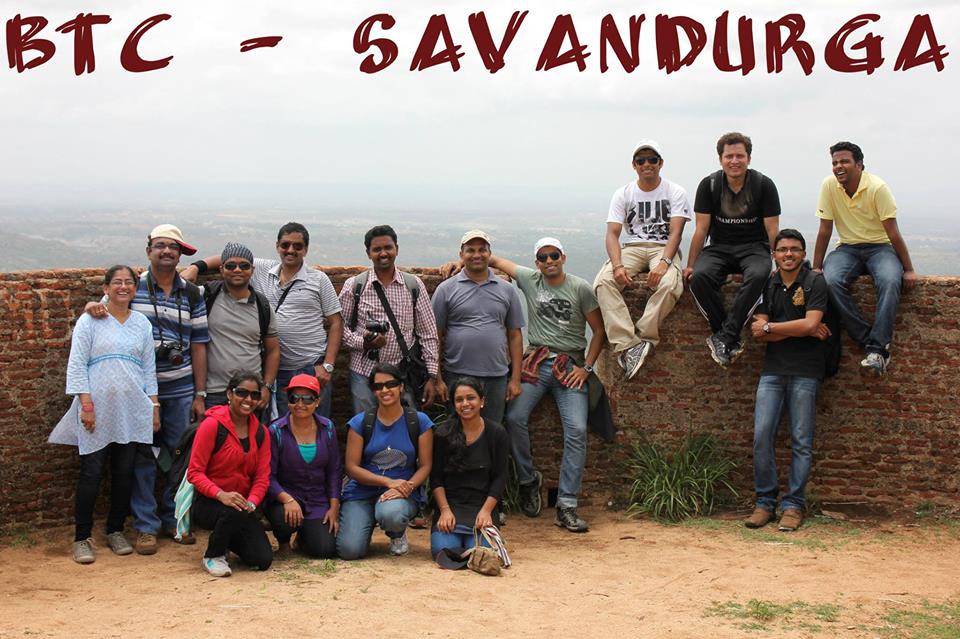 Savanadurga fortress was meticulously constructed which had access to shelter, water resources at the top of the hill which had natural ponds to meet the water requirements.   we could witness the lush green water resources which is still intact and drips water across the rocks so that is is best utilized.   Team reached the peak in some time and we spent time enjoying the nature beauty 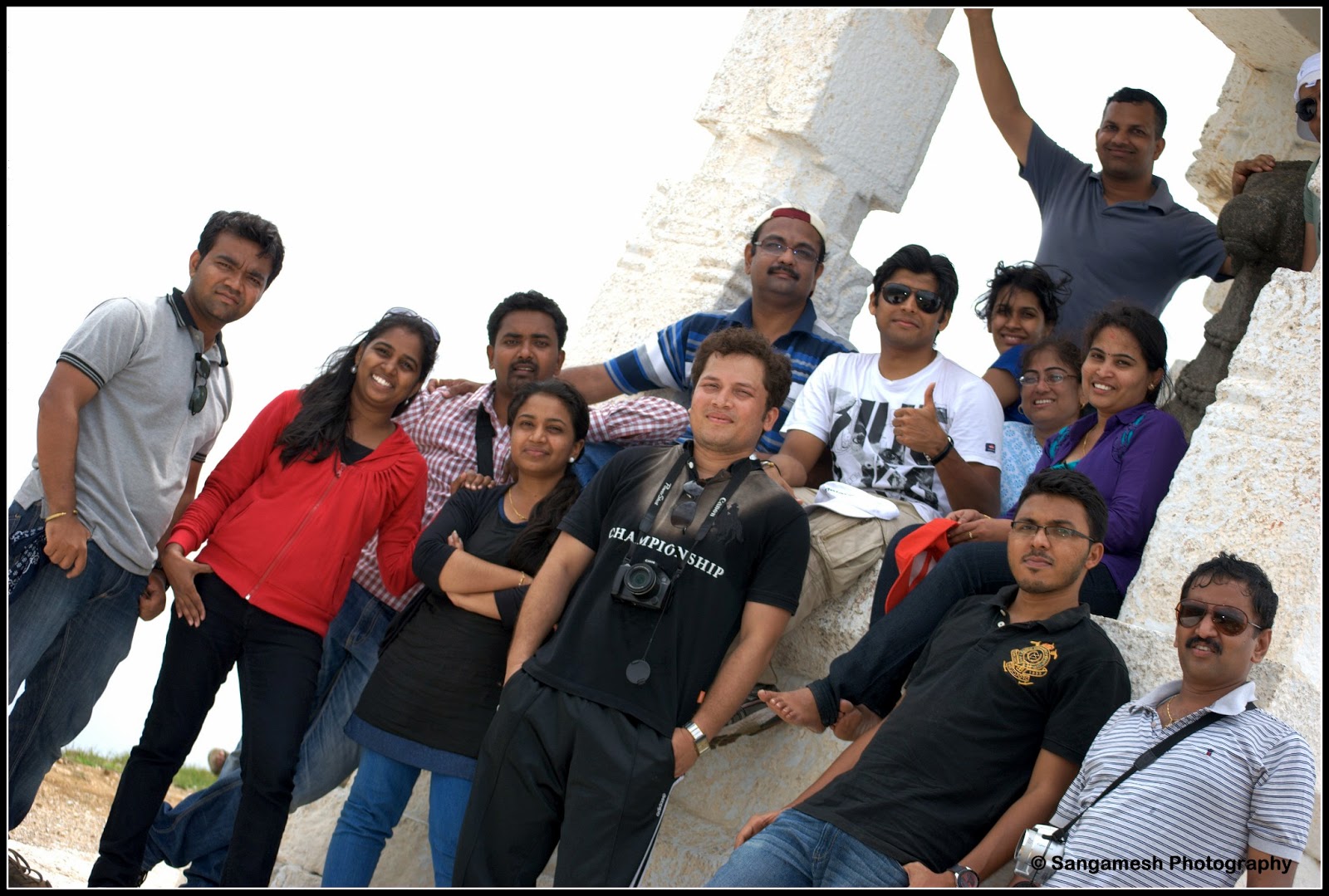 Most of the 1st time trekkers who found it difficult to scale up at the initial level, never complained of any difficulties till they reached the peak.    I had to motivate my better half to complete the trek as every one were eager to scale to the next point.     We could see many enthusiasts like us joining us at the peak and most of them were from bangalore.    We had our 3rd photo session at the peak of the hill before we could hog on some eatables, courtesy  Anshu n Vivek.      Anshu  had brought fresh cucumber and distributed the slices to the team.    In the meantime we had multiple photo sessions of different poses.  It was nostaligic for me as i had scaled savanadurga way back in the 90's and it was my 3rd trek to the peak.   We had a panoramic view of the in and around places of Savanadurga / Magadi.      Especially the Arkavathi - Kumadavathi River flowing into Manchanabale ( Manchanabele) dam before flowing towards Tippegondanahalli Reservoir. Mancha is the fisherman folk who used to swing across their fishing nets ( bale) before it turned out to be bele ( prize).   Even today when the river is in full swing you can see the local fisher men netting using the local boats.    This place is also very dangerous for good swimmers as most of the people have lost lives here.    We can only witness the beauty and not venture out on the rocks and jump down.   If you slip, you are sure to get into the water and no help would be available instantly.    After spending good time at the peak, we descended back to the base which took around 2 hours for us to approach the base.    Getting down the steep hillock which does not have any support was a tricky situation.   Almost all the best of the shoes will undergo performance tests in this hillock as at times it gets too slippery and especially if it is windy.    Luckily we did not face any adverse weather during our trekking the peak, but had to face incessant rains while climbing down.     I was the last one to climb down with Rufus.    Sangamesh and Sribacha helped Chaya and navigated her to safe descent.     When we had climbed down 75% of the peak, we had showers for 10 mts which resulted in slippery rocks and we had to reduce our pace in climbing down.  Rufus was feeling uneasy and had consumed almost entire water bottle he had brought for the trek.  Should appreciate his spirit of not giving in, he made it to the base after some effort.      Team finished lunch at nearby local hotel and we planned to drive down to Manchanabele dam.    The road was adventurous with pot holes and slippery surface.    After covering 17 kms we were in front of the dam and trekked down to the catchment area of the dam. 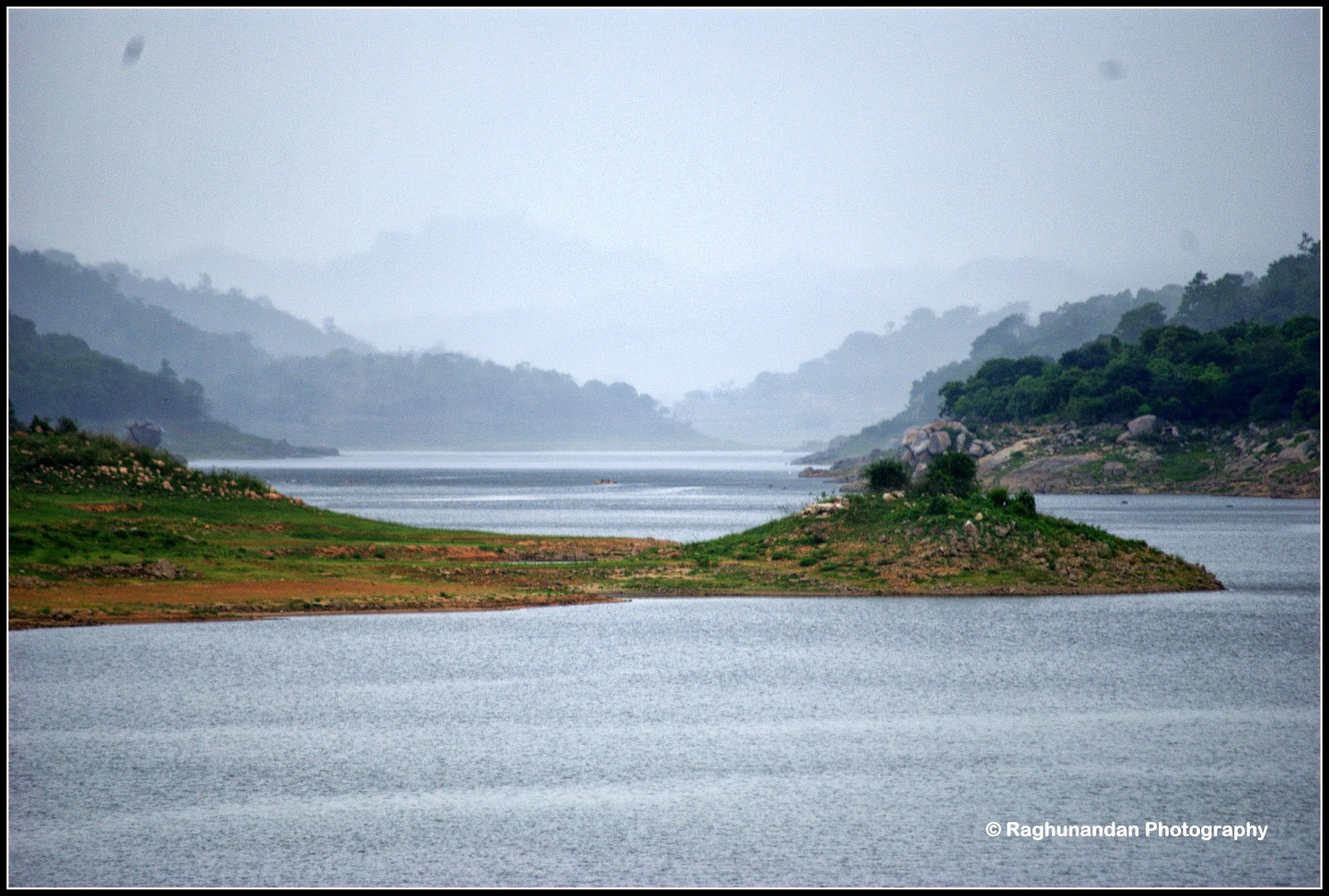 We received showers once again and could not do much of photo sessions.    We had an interesting get together at the end of the session where Anthony took the feedback about the event and conducing individual introspection of the participants by the team members.     It was an ice breaker for us to bond much more with others.     After spending quality time we embarked back to bangalore through Bayalu ( Master Controlling Centre of ISRO) , Big Bannian Tree .   We were received with thunder showers when we entered bangalore and almost stuck for 2 hours before i reached home .   Overall it was an amazing trek by amazing team and every trek has brought new friends to my network.   Look forward to amazing treks with the team once again.

Posted by svraghunandan at 08:20 2 comments: